Maa Katyayani is the warrior goddess avatar of Maa Durga and she took the avatar of Katyayani to eliminate Mahishasura.

The pictorial representation of Maa depicts with four hands holding lotus flower and sword on left hands while right hands can be seen in Abhaya and Varada Mudras. Her carrier is a lion.

The colour for today is Yellow and pink coloured flowers are dear to Maa Katyayani. 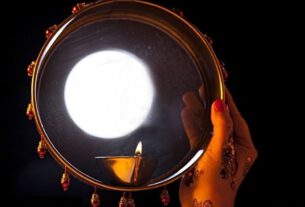 How women can spend their day during Karwa Chauth