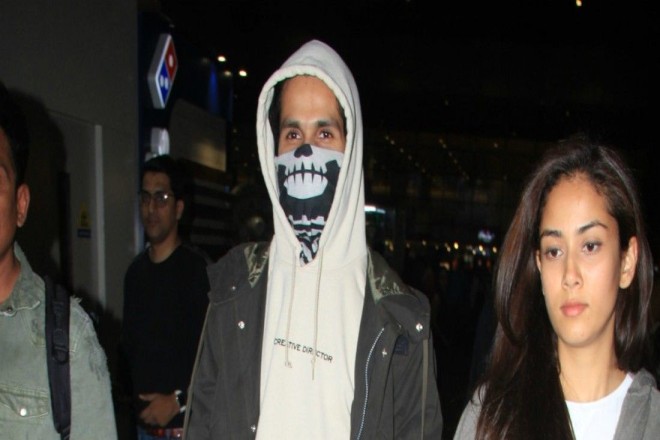 Usually, Shahid Kapoor keeps his outfit rather subtle besides adding quirky accessories here and there.

But on the acting front, when Shahid Kapoor shoots a film, he makes sure that he’s putting his best foot forward, even if that means getting hurt sometimes. Recently, when he was shooting for the film Jersey, for a scene at the Mohali Stadium, while practising he was hit by a ball on his mouth that led to a deep wound on his lower lip.

He received 13 stitches to close the wound which means it’ll take days for the bruise to heal. Now naturally, while going back home he needed something to hide the bruised lip. In a situation like this, one would probably use a scarf, or a pollution mask but not Shahid Kapoor. He wore a really rad skull mask

He wore a plain white hoodie with a pair of khaki cargos and layered the outfit with a jacket and shoes from Rick Owens called the Black Geobasket sneakers. These pair of sneakers are worth 1190 USD which comes down to Rs 84,289. But the skull mask was the clear winner of this outfit.

Things You Should Know About Suits